Alice Victoria Fortemonne Walpole de Lucelet is an elf born in Sidhe, and travels with a talking, magical grimoire, TOC. Her birth name is Freyja Sylvari.

She makes first appearance in the fifth chapter of the Book 1: Nightmare Phoenix.

Alice is a teenage-looking elf with pale skin and crimson eyes. Her white hair reaches slightly past the middle of her back. She wears a tight-fitting shirt under her black hood lined with gold trims. This pairs with her black pleated skirt, thigh-high socks and boots. Both her hands has finger-less gloves, with her right arm having an arm warmer as well. She also wears a belt around her waist, which has TOC's holster attached on one side and her short sword on the back.

When Alice was younger, her hair is noticeably shorter, hanging slightly above her neck. She wears a simple dress with little to no decoration, hidden under her hooded cloak.

When her God Core «Solomon» activates, Alice's appearance changes to match that of the Eternal King. Her eyes become a deep blue in color. Her hair shortens and becomes more masculine and messy in style. She wears a golden crown on her head, and her cloak is worn like that of a cape. Solomon-Alice also relies very little on spells and magical abilities, instead weilding her sword and marching onto battle.

She was born in Sidhe, Realm of the Storm Elves, as Freyja Sylvari. During the time of her childhood, however, Sidhe was under constant attack of the other Realms and an accident caused her to be ripped apart from her own Source Realm. She was later picked up by a travelling curator, who named her Alice, and labeled herself his assistant as she grew up.

One time in her dreams, she wounded up inside the Mystic Archives where she met Dalian. Her visits became a regular occurence which allowed her to discover that the man had been trapped inside the library, which is located within "the plane between Realms", as some sort of punishment. Dalian hears that Alice had received TOC from her Teacher, he hands her a key to the archive, which she keeps up to this day. After this event, her dreams of coming to the library had stopped.

Alice's relationship with TOC is very much like a guardian and a dependent. Although she respects him to a high-degree and is thankful for the company he had provided throughout her childhood, it doesn't stop her from occasionally yelling at him, most especially when their battles take a wrong turn.

Even though they sometimes end up to childish banterings of calling names, TOC is very protective of Alice and her well-being, and she values him just as much.

Possessing the God Core «Solomon» and having been entrusted by the demon Dantalion, Alice has power over two libraries of magic—the Mystic Archives of Dantalian, received from the Demon of Knowledge himself, and the Crimson Library of Raziel, which she is able to wield because of her God Core.

Alice's sprites (default and young) in Pleiades: Stars and Time

Alice's facesets (default and young) in Pleiades: Stars and Time 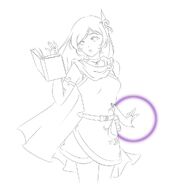 Alice's original character design
Add a photo to this gallery

Retrieved from "https://excelsion.fandom.com/wiki/Alice_de_Lucelet?oldid=683"
Community content is available under CC-BY-SA unless otherwise noted.